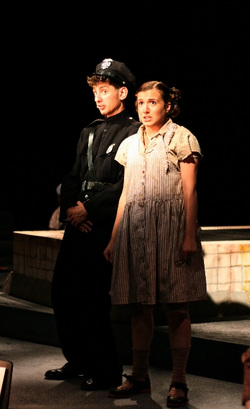 For a show that identifies itself as “not a very happy musical,” Playmakers Repetory Company's Summer Youth Conservatory's presentation of Urinetown is a blast! Carried by an incredible young cast, catchy songs, fun and fast-paced choreography, and top-notch direction by Julie Fishell & Jeff Stanley, this performance is one of the best of the summer.

Urinetown tells the story of a town that's been experiencing a long draught. In an effort to conserve water, the town's most greedy businessman charges people for the “privilege to pee.” The show relies heavily on silly humor and symbolism, and the vibrant cast of middle and highschoolers are adept at relaying both.

Alex Pellett shines in her role as Penelope Pennywise, the guardian of the public toilet. Her voice is rich and clear during musical numbers, and she brings a distinct flair and bawdy charm to the character. Olivia Griffin also stands out with her excellent comedic timing and pitch-perfect precociousness in her role as innocent Little Sally. Dylan Peterson's Caldwell B. Cladwell is just as greedy and evil as he should be, but the light-on-his-feet actor manages to make him at least a little likeable. The fact that young Peterson truly emobdies the role of the middle-aged character speaks volumes about the costumes and make-up found here. Strong-voiced Adrian Thornburg nails his role as Bobby Strong, the young man who eventually starts a rebellion against the town's draconian policies. Plus, he has excellent chemistry with his adorable love interest, Hope Cladwell, played to perfection by Laura Bevington. Last but certainly, certainly not least is Dylan Goodman in his role as Officer Lockstock, the show's fourth-wall-breaking narrator and not-quite-heartless enforcer of the law. Goodman, with his booming voice and larger-than-life stage presence, infuses the show with vivacity and fun.


The incredibly catchy musical numbers are brought to life with fast-paced, boot-stomping choreography by Missy Barnes, who utilizes every inch of the stage effectively. There's not a bad seat in the house, thanks to careful attention to staging, and the set, by Adam Maxfield, serves as the perfect backdrop for all of the action.

The show is so fantastic and the actors so well-trained that it's easy to forget this is youth theatre—not that that's a problem. If anything, the actors' young ages make the show all the more fun and lively. It's obvious that everyone involved in this production put in a lot of work, work that paid off—this show isn't just good for youth theatre; it's good theatre period.